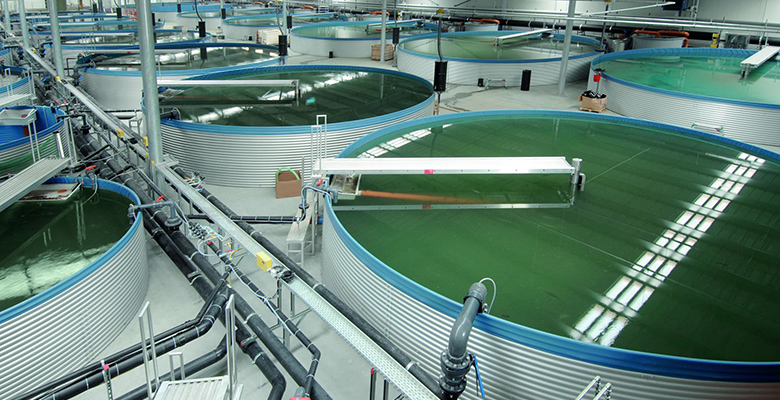 The Swiss fish farm Valperca experienced problems with water quality in a recirculation system and could not produce fish at designed capacity. With the Primozone Ozone Water Treatment Solution the water quality improved within a couple of days.

Valperca is a Swiss fish farming plant situated in the beautiful Valais valley. They produce perch, which is considered a delicacy in Switzerland. The perch command a high price as the supply of wild perch is not large enough to satisfy the market. The Valperca plant can breed 300 tons of perch per year.

“…the redox value increased instantly and after only a couple of days we had reached the desired water quality.”

In May 2010 Primozone was contacted by Valperca who was experiencing problems with the ozone system they had installed in a recirculation system only a few months earlier. The capacity of the ozone system was not sufficient to keep the water clean for the designed volume of fish. Valperca was just able to use part of its production capacity. The water was not cleaned properly, the redox values were too low and the organic load too high in the fish tanks. As a result, the fish did not grow according to plan.

In October 2010 Primozone delivered a customized Ozone Water Treatment System to Valperca who, after only a couple of day, experienced a much better quality of the recirculating water.

“The design of our old ozone system was not optimal, which meant that we did not get the desired cleanness of the water,” says Mr. R. Moser, manager at Valperca.

“Primozone was very helpful and designed a complete system specifically for our need including an ozone generator, dissolution system, and reaction tanks. It all works very smoothly as the Primozone ozone generators are connected to and controlled by our redox meters, and the ozone levels are controlled automatically. When the system was installed the redox value increased instantly, and after only a couple of days, we had reached the desired water quality. Both delivery and installation were made according to plan and without any disruptions. We are very pleased with Primozone and their Ozone Water Treatment System.” concludes Mr. R. Moser.

“The design of our old ozone system was not optimal, which meant that we did not get the desired cleanness of the water.”
Mr. R. Moser
Manager at Valperca