Wastewater treatment is crucial for human health, as well as for protection and preservation of the environment form the distribution of contamination and water-borne diseases. 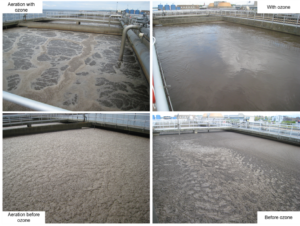 Filamentous sludge before and after treatment with Primozone Ozone system

It is a common practice that wastewater treatment plants are based on the activated sludge principle. Due to mention that Activated sludge is formed by organisms that flocculate and clump together to form a flake-like structure around the suspended organic material they feed on. As the result, larger masses settle out of the water and create an active pool of microbes. Biological floc consists of bacteria and fungi, among others. As for bacteria, it covers approximately 95% of the total microbial mass and is crucial for deprivation of organic substances in wastewater treatment process.

Filamentous bacteria have higher surface area and volume than conventional floc, also it is slow to settle.Under special conditions, these bacteria can grow excessively, which will cause problems with sludge settling thus reducing the efficiency of the wastewater treatment plant. Extensive research is ongoing in order to be able to determine what causes an extensive growth of certain type of filamentous bacteria. It was noticed that season changes and variation in ambient temperature could be one of the causes of the abundant growth of filamentous bacteria.

An augmented development of filamentous microorganisms can lead to various undesirable effects, one of them is – Floating Sludge. Floating sludge tend to float on the surface due to the growth of filamentous organisms, among others. The cell surface of some filamentous bacteria adsorbs air and nitrogen gas bubbles that cause the sludge to swim upwards. Floating sludge should be removed quickly, not only because it can cause the formation of foam in the septic tanks of anaerobic sludge treatment but it can also lead to “sludge escape” resulting in loss of biological mass needed to perform the main treatment.

Ozone is a very strong oxidant and as a result effective method for wastewater. In the treatment of sludge containing filaments and Primozone ozone solution improved the settling characteristics of the sludge without any negative effect on the important nitrification process.

Öresundsverket WWTP, decided for Primozone plant and managed to effectively solve the challenge with filamentous sludge and in the same time increase capacity on water throughput.

The Primozone SM900 is a complete ozone plant housed in a small container. In case of Öresundsverket WWTP, the plant was complete with dissolution system and a reaction tank. The advantage of the container solution is the possibility to place it close to the activated sludge, and no need for new building.

The results of the pilot project became that sludge volume index was reduced dramatically while the biological process was not affected.