Primozone is one of four equipment suppliers for a European project for improving the efficiency and safety of ozone use in the management of water quality in the aquaculture sector including Recirculation Aquaculture Systems (RAS).

Ozone has a number of advantages when it comes to improving water quality at RAS. At land based fish farms, where fish is raised in tanks, there is often a problem with high organic loads; ozone is a great tool for removal of fine particles and dissolved organics. Research shows that using ozone for water treatment at RAS actually improves productivity as fish is healthier and survival increases. 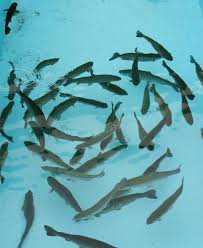 Designing a high performance ozone system optimized for specific site conditions takes a lot of knowledge and the issue is often the dissolution of the ozone into the water. The lack of knowledge and user friendliness of ozone and ozone dissolution systems has been a major issue for many fish farms in Europe. This is the one of the reason why the RAZone project was initiated. The aim is to find an ozone dissolution system that is both more effective and efficient.

Primozone’s roll in this is to supply high technology and user friendly ozone generators and the knowledge of designing optimized ozone dissolution systems for aquaculture.

The project was initiated by the Norwegian company, Normex AS and the research work of the project is funded by the European Union’s FP7, managed by REA – the Research Executive Agency. In addition to Normex and Primozone, three other equipment suppliers, two fish rearing companies and three research institutions participate in the project that will run until the end of 2014.